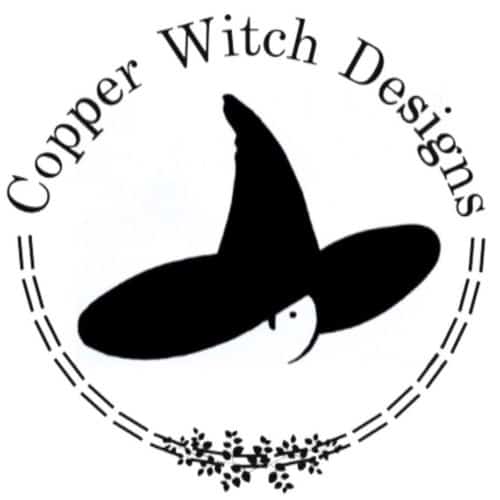 Chicken feet. Forged copper chicken feet. Cute, aren’t they? Well, I think they are.  And I bet you will, too, once you know their story, because these copper chicken feet are part of this year’s holiday ornament for Asheville Humane Society – a copper and bronze chicken that can be used as an ornament, metal wall art, or a mobile – and that will be available through Asheville Humane Society beginning November 4th, 2017. (For those who don’t know what that’s all about, you can catch up here at my 9/21/2017 blog.)

I had originally intended to do a portrait of a horse or pig or goat for this year’s ornament. Something big. Or, something with a cute little piggy nose or awesome goat eyes. Something we automatically think of when we say that farm animals are among those that benefit from the care and adoption services offered at Asheville Humane Society. However, over the course of the past few years, I have become increasingly aware of how adorable, clever and endearing chickens are, and I decided that I would honor these sweet, mostly overlooked birds with this year’s ornament.

The particular chicken that I chose for my model is a Rhode Island Red chicken . . . 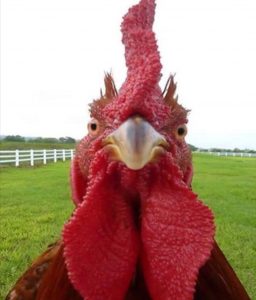 . . . an American-bred domestic chicken that was developed in Little Compton, Rhode Island, in the late 1800s. After its development, the breed quickly became popular nationwide due not only to its hardy nature, but also due to its gentle, friendly, and inquisitive personality. It eventually earned the distinction of  becoming the state bird of Rhode Island. However, I personally chose this chicken because it is the breed of chicken that made me realize how just much personality chickens have. My cousin, Polly, had a Rhode Island Red chicken and, over the past years, she regularly shared stories about her chicken breaking out of her coop and being caught in an array of clever and comical activities around their property. Her escapades led me to start fondly calling her Run-Around-Sue. Run-Around-Sue is gone now, but her curiosity and sense of adventure touched me and I miss her even though I only knew her through stories. So, this year’s ornament is not only a tribute to the chickens that come to Asheville Humane Society, but also a memorial to Run-Around-Sue – the chicken who taught me about chickens.  I could talk more about the interesting nature of these birds, but I am more interested in capturing their nature in my artwork. So, I want to show you how that happens. How does a chicken grow from flat sheet metal and copper tube? How do you give it personality?  How do you do it justice?

Well, you’ve seen the feet. I think they kind of speak for themselves.  🙂

What comes next? The eyes . . . how to capture that wide-eyed, curious chicken look? How about a series of copper discs?  Cut, textured, and domed all to feature that little black eye in the center. 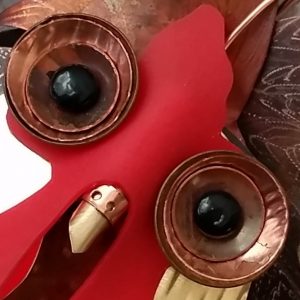 And, bodies . . . What should they look like? What is the visual feel of a chicken body?  It seems to me that a warm soft patina, some texture, and round shape can capture that plump, soft look of those bodies. That and some hand etched texture for the wing and tail feathers. 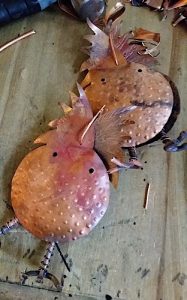 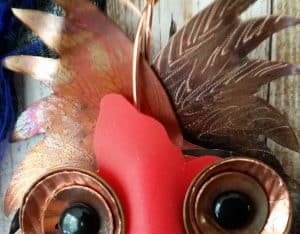 And, then there are the faces . . . little beaks, and red stuff (what is that stuff and what can possibly replicate it?) Layers of things going together to make those complex faces that are so unique to birds, and specifically to chickens.  I settled on bronze, copper and . . . silicon baking sheets.  Yep.  That stuff has just the right “wiggle” to it.  🙂

And, finally, it all goes together, all those little parts, to make one bird, a descendant of the great dinosaurs.  Something soft and cute, with personality, a character all its own, and dignity.  (I think the first prize state fair medal was a nice touch, don’t you?) Just waiting for someone to adopt it, take it home, and love it . . . 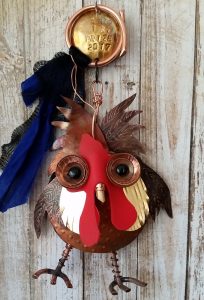 So.  There you have it.  The birth of my copper chicken.  My 6th annual limited edition ornament for this year’s Asheville Humane Society holiday fundraiser for the Lily Grace Fund – the special medical fund for animals requiring extraordinary medical care or rehabilitation.